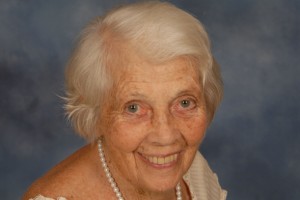 We have learned that beloved member of this congregation Hazel Burke died on Sunday, February 13, 2022,

Hazel was born in Rutherford, NJ on October 9, 1922. She was in her 100th year, a goal she had hoped to achieve before she suffered a stroke. Hazel was the last of her generation of brothers and cousins. She was predeceased by her husband of 68 years, Harold Burke, her parents, and her three brothers and their wives. She leaves behind five children, ten grandchildren and 23 great grandchildren plus nieces, nephews, and great nieces and nephews.

Hazel was a graduate of Rutherford High School and Hackensack Hospital School of Nursing. She was certified as a Registered Nurse in 1944. She married Harold on November 12, 1944. After working in hospitals in NJ, NY, VA, and OH, she worked in a nursing home in Moorestown, NJ followed by RCA and the Federal government as an industrial nurse. She and her husband financially helped their five children in their college years, and then she decided to obtain her BSc degree from St. Joseph’s College in Maine in 1984 when she was 62.

They also loved to travel and visited all 7 continents. At age 65 she learned to ski, and she and Harold conquered slopes in NJ, Pennsylvania, and a few in New England. Upon retirement they moved from their home in Cherry Hill, NJ to the summer home they owned in Toms River, NJ and winterized it. Every house had cesspools which after running too much water would start to overfill onto the sandy yard. She went to every owner on her street and convinced them to sign a petition to get city water and sewers, and they agreed to pay half of the cost. Finally, the family could take indoor showers!

They continued to travel, and after witnessing a woman not doing a good job teaching others to play bridge, she found out how she could get the same job on cruise ships, took the test, and they were able to cruise by only paying for the land transportation for herself and Harold to get on the ship. Once when she told a fellow passenger she was the “bridge director,” he thought she meant the bridge where the captain was stationed which made her laugh.

In 2012 they moved to assisted living until Harold’s death in 2013, and Hazel relocated to Brookdale Palm Beach Gardens to be near two of her children. Hazel loved to swim daily whether it was in a pool or the ocean where she first learned to swim. In Toms River she lived on a lagoon, and she would swim up and down it dodging boats and waving to neighbors. At Brookdale she had a year-round pool that she was in every morning for an hour, made friends, played bridge, trivia, Scrabble, and traveled some until her health began to fail. The family is grateful to the Jasmine and PBG Medical Center’s Hospice teams as well as the staff and friends at Brookdale who helped her during these past eight years.

In addition they are thankful for the care she received at the medical center and Jupiter Rehabilitation by the numerous doctors, nurses, and aides at those facilities since she was treated in both a number of times. She was one of the survivors of Covid-19 when she was 98. All agreed she was a strong woman who was a fighter through any of her illnesses until her body finally gave up.

There will be two memorial services. One at the Universal Unitarian Church in Cherry Hill on April 9 th at 1:00 PM.

There will also be a local Memorial Service at Brookdale*, where she was a resident. The service will take place on Monday, February 21st at 11am and all are invited to attend.

The Crisis of Identity

Humanity is gripped by a crisis of identity, as various groups enjoin a needless struggle to differentiate themselves, why they are here, and what they should do about it. The result is a mind-numbing array of “us-es” and “them-s” with self-definitions growing more and more … read more.