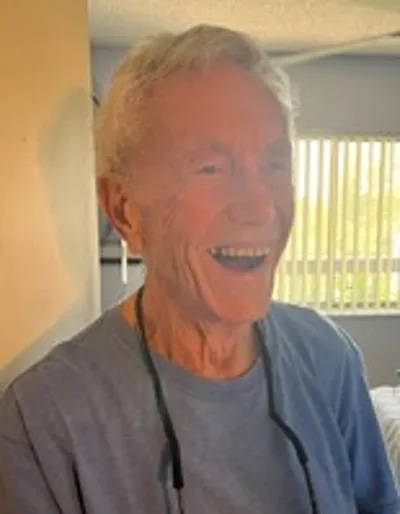 We have learned that long term and beloved member of this congregation Dr. Richard “Rich” Palermo died on Friday, June 10, 2022.

Rich died peacefully, in his sleep. He was a 27 year resident of Jupiter. After 25 years of building and maintaining a highly successful Chiropractic practice in New York, Rich retired from Chiropractic, moved into a remote area of the Adirondack Mts. and began writing full time. His first publication, a 36 page handsomely appointed public information booklet about Chiropractic was both a critical and commercial success, and remained in print for twenty years.

He subsequently secured a position as a columnist and reporter for the widely read Hamilton County News. In all he published articles in five newspapers including the Palm Beach Post.

In 1994, he and his wife moved to Jupiter where he became a Guardian ad Litem volunteer (court appointed child advocate). Subsequent to the untimely death of his wife, Marguerite, in 1997, he focused his efforts on public speaking about a variety of topical issues and continued to do volunteer work.

He is survived by his loving partner of seven years, Sarah Howard, his sister, Vi Mandracchia, his beloved children, David Palermo, Mark Palermo, and Dr. Bethann Palermo, as well as eight grandchildren, five great grandchildren, and numerous nieces and nephews

His final lesson was that a successful life is not measured by wealth, fame, or power, but by whether or not we had built mutually loving relationships with those closest to ourselves, and tried, whenever possible, to serve our less fortunate fellow human beings. On the basis of those perceptions, he died a happy man.

The family wishes to profess their profound gratitude to the Trust Bridge Hospice for the superb care they gave to their father in the final days of his life.

Check out our Complete Calendar
Posting....